Jay Nunes has been playing guitar and singing since he was twelve and his influence started long before that around campfires with his family.  Every summer his parents would take the four kids to Ginny B campground in Foster Rhode Island and most nights they would get together with their camping buddies and play guitar and sing songs by the fire. The Platters, Elvis, Peter Paul & Mary, and several artists and groups from the 40’s to the 70’s made up the song list from those wonderful times in his life. Even at the family home in Cranston RI the music never stopped.  Three out of the Four siblings played guitar and sang together for years until they became adults and started their own lives.
In 2008 Jay suffered a major injury to his left hand that required three surgeries to repair and left him without the ability to play guitar.  In July of 2009 he and his wife, fiancé at the time, were out shopping and he suggested they stop in a music store for no reason other then to be around musical instruments, He had tried to play several of the guitars there but he was unable to do so for any length of time without being in serious pain. On the way out he joked about this “Little Guitar” hanging on the wall. The salesman informed him it was a Ukulele and he should try playing it explaining a “D" Chord on Guitar was a “G" chord on the Uke.  Jay played it and truly enjoyed the unique sound and playability this small instrument possessed. His Fiancé put her hand on his shoulder and said “Do you realize you have been playing that instrument for quite a while and have not complained about your hand hurting?”. He responded,”I have to have one!!!”. Two weeks later she presented that Ukulele to him for his birthday.
Next, she found the Tampa Bay Ukulele Society and suggested he join and attend the gatherings. Shortly after that he started the first monthly Ukulele Jam Session in the Tampa Bay area in April of 2010. The impact of those summer nights long ago at the campfire resonates with him to this day and is felt at the 2nd Saturday Ukulele Jam Session in Largo Florida. Everyone is welcome from beginners to experienced players and the fun continues to this day.  His passion for this wonderful instrument also led Jay to giving Ukulele lessons and sharing the gift of music with others.
His most joyful moments are when we all get together and play and sing together for there is nothing that binds us together as a song shared between friends.  He will be the first to say he owes it all to Kelly..  :O)

Press:
Tampa Bay Times: click the link below to watch the video
Tampa Bay Times Reviews Jay Nunes with The Tampa Bay Ukelele Society's Monthly Jams
​Check out - Tampa Bay Times Review; Jay Nunes, former President of the Tampa Bay Ukulele Society meets on the second Saturday of every month at the Imperial Palms East Club House in Largo. The Tampa Bay area wide group has over 3000 members, with jamming spots on both sides of the bay. "This is the best group," said uke player Temple Terrace resident Patricia Bowes, about the Largo jam. "They play the best songs, they have the best people, and they are groovin'!" Bowes has played for several years on her own and has been jamming with the group for over one year. (Oct. 2014) [Lara Cerri | Tampabay.com]
​
Ukulele Magazine: Click the link below to see the full arricle
Ukulele Magazine, Fall 2014: JayNunes with Tampa Bay Ukulele Society Knows How to Host a Jam Session
Written by Julie Garisto, this article appeared in the Fall 2014 issue of Ukulele.
On a balmy Saturday afternoon in Largo, Florida, a southern suburb of Tampa, 40 people have gathered with their ukuleles at a palm tree dotted apartment complex inhabited mostly by retirees. Excitedly chattering like high-school kids in a band class, the members of the southern chapter of the Tampa Bay Ukulele Society (TBUS) are called to order by 49-year-old jam-leader Jay Nunes.
​ 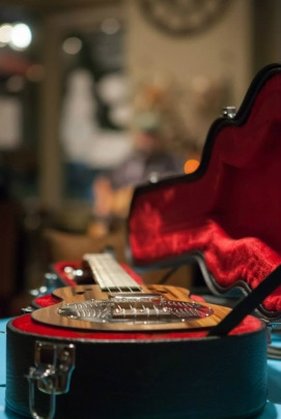